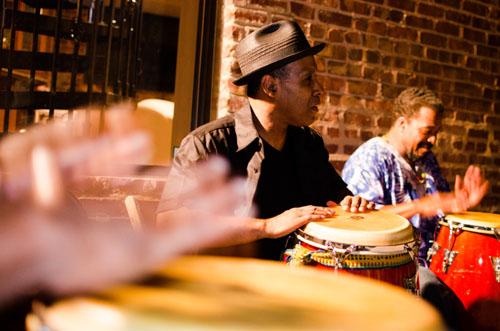 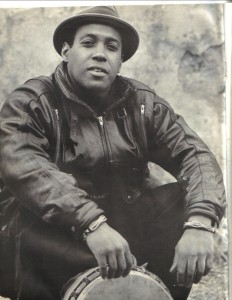 Chi Sharpe is a percussionist extraordinaire. He is a native of Winston-Salem, North Carolina, where he began his music career with his family band “Hell ‘n’ Highwater.” The band, together 14 years, provided him with most of his early musical experience. His first formal lessons of Afro-Cuban music were in Portland, Oregon during 1976. In 1979, he began to study West African music in Brooklyn, New York. Then on to Toronto, Canada, in 1979, Mr. Sharpe accompanied exercise and dance classes revolving around African drumming,as well as provided music for African dance troupes. The first dance company he performed with was composed of musicians from South Africa. In 1985, he continued his continental drum study journey in several countries in West Africa and has since returned several times to further develop his craft.

In 1995, he moved overseas to Amsterdam and worked extensively across Europe with several artists from Guinea, West Africa who were living in the Netherlands. Chi returned to the States in 1997, and continues to live and play in New York City. 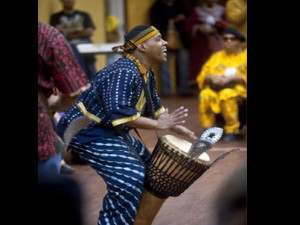 “The rhythm of life rests in the hands of Chi Sharpe an incomparable world class percussionist! He lights up a stage and inspires one’s soul! His mastery of so many musical styles and percussion instruments in particular the myriad of African ones is nothing short of magnificence. His genuine smile, amazing dancing ability while drumming and desire to reach the hearts of the hearer are sure to be captivating for anyone who has the Chi Sharpe experience!”
–T. Renee Crutcher
Founder/Executive Director at Sankofa Ministries & Tellin’ Our Story Publishing, Inc.

Read an interview with Chi on http://IndieSpiritMagazine.com.